For the final leg of our post-study abroad trip (minus the Mallorca layover, where we did nothing but lie on the beach for a glorious day), Alayna and I took a 90-minute train from Salzburg to Munich. This train ride from across the Bavarian countryside was the sort of beautifully cliché travel that I had imagined doing prior to arriving in Europe, but it turned out that most of the places I was traveling were cheaper to get to by bus or plane (yay RyanAir). Once we arrived in Munich, we had to take another train for about half an hour to where our hostel was. This is because, technically, we weren’t staying in Munich. We were staying in the attic of a log cabin in the Bavarian Forest. It was a bit obnoxious in terms of daily transportation, but still, pretty neat experience. That said, I do not recommend staying that far out of town if your primary destination is Munich, but every trip has its own set of learning experiences. I can certainly say that Alayna and I enjoyed some less-typical touristy experiences on this trip, and that made the long commute worthwhile.

On our first full day, we headed to Füssen, about two hours southwest of Munich, to see Schloss Neuschwanstein and Schloss Hohenschwangan, 19th-century Romanesque castles. We did not go inside due to crowds and time, but having been in other castles/palaces/fortresses over the semester (in Madrid, Segovia, and Salzburg, plus the Moorish palaces of Córdoba, Sevilla, and Granada), I did not feel like I was missing much (if I were a German history buff, it would have been a different story). Instead, we hiked up some beautiful wooded hills on our way towards the castle, and it felt like wandering through a fairy tale (without the tourists and bugs in the woods, of course). For lunch, we found some apple strudel (once again not as good as the lake district café in Salzburg, but still delicious) and a very odd sausage that I will never eat again because it was white and served in a pot of hot water. 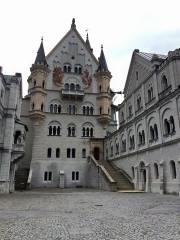 We returned to Munich just in time for dinner at Hofbrauhaus, a massive beer hall with live Bavarian-style music. I enjoyed potato soup, and, yes, apple strudel (I only had a short time in Bavaria to eat it!). The waitress laughed at me for ordering tea in a beer hall, so I’ll have to make up for that one my next trip to Germany now that I actually like beer (thank you, dark beer, for your coffee-like flavors). After dinner, we walked around Marienplatz, the main plaza of Munich, and saw the Glockenspiel.

On day two, we began our day by nearly getting lost in the Bavarian Forest in attempt to find Germering See (lake). Fortunately, our hostel owner happened to drive past as we were giving up on finding the lake and drove us there himself. It was so peaceful at the lake, tucked into the trees and fields and tall grasses, the only people a couple older men just fishing or relaxing. And we never would have found the lake if we had stayed in the city center! Before heading into Munich proper, Alayna and I went to a bakery in Germering, the small town near our hostel where we learned that not even all the young Europeans speak English, even in Germany. However, between gestures, smiles, and a few key words that we came up with in German or English, we managed to purchase some delicious pastries. Simply learning “good morning” and “thank you” in the language of the land can go a long way.

The rest of our afternoon was not fun, but it was an important experience. Alayna and I went to the Dachau concentration camp, the first to open in 1932, originally for political prisoners. You are allowed to walk around the camp alone, and there are explanations of curated items and key places for you to read, but Alayna and I decided to go with a guide. That turned out to be a wise decision, as our guide knew Holocaust history well and was there because she firmly believed that educating others about this atrocity was an important way to prevent it in the future. I will defer the details for now because I plan to write an entire post reflecting on the concentration camps that I have been to in Germany and Poland. It was a horrifying experience, but I think that everyone should go to have even the tiniest real grasp of how a once seemingly benign outsider politician could result in such devastation.

On a lighter note, Alayna and I returned to Marienplatz for the evening and watched the Glockenspiel chime. The traditional-looking dolls dancing inside the clock reminded me of “It’s a Small World” (you’re welcome for putting that song in your head). During one final dinner of German sausage, potato salad, and apple strudel, we met an elderly man who identified himself as a “true Bavarian.” He showed us photos from his youth and wistfully told us about his first love at 17, who was from Los Angeles. As we parted, he repeated several times, “I wish you all the very best.” I love meeting kind and interesting strangers while traveling. On the way back to the hostel, we walked/danced in the light rain next to the fields and forest, and it felt like a perfect conclusion to a semester of travel.

***I am struggling to locate the rest of my Bavaria photos after getting a new computer, so for the moment I am just sharing the couple of phone photos that I have. Updates coming!***

3 thoughts on “Munich, Germany (and a couple towns we didn’t know to expect)”